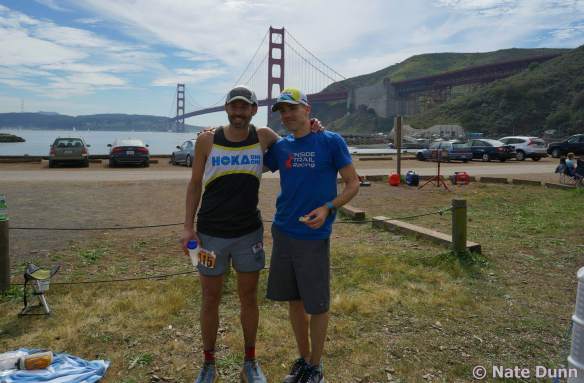 With Marin Ultra Challenge 50mi champ and Hoka teammate, Paul Terranova, who won both the Bandera 100k and Rocky Raccoon 100mi in January of this year. Photo Credit: Nate Dunn

Driving down to Marin County on Saturday morning at some ridiculously early hour, I counted six months since I’d last raced at Pine to Palm 100 last September. Furthermore, I got to thinking how it didn’t seem like a whole year has passed since I last ran today’s race (the 50-mile version). So cruising down the 101, I likened life to the “Happy Pi Day (3.14) Domino Spiral” video I shared with my students on Friday—the speed with which the dominoes fall increases as you get closer to the center. Time moves pretty fast…

With my accelerating stream of consciousness bending both time and space, I soon found myself under the iconic Golden Gate Bridge, at the Start/Finish of the 4th edition of Inside Trail Racing’s Marin Ultra Challenge. I enjoyed some great training these last few weeks, after getting on the other side of a fairly mild, but nonetheless, frustrating stress fracture.

Then just as soon as I had my best training week, I’d come down with some flu-like symptoms at the start of last week. The plan was to hit one more bigger week of training, to cap off my prep for Gorge Waterfalls 100k, here on March 28th. So I show up to my Tuesday hill session, park the car, think about doing hill repeats and… put the seat back and fall asleep. When I wake up, I drive home. I try again the next day. I didn’t even make it to the park; I just put my running stuff in a cupboard in my classroom and went home. The next day, I start my hill workout and get two intervals done before jogging around the park before heading back to the house. By Friday, I was effectively tapered, feeling much improved, and instead of doing the long runs I’d planned, the thought of running the 50k at MUC sounded like a the perfect cherry atop my Gorge 100k prep. 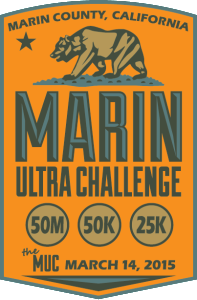 The 50mi and 50k start together at around 6am and the young-guns took it out a lot harder than last year. In 2014, running the 50-mile, I found myself leading both races by mile 2. Not having raced in a while, this was a wake-up call, especially running up this steep road under the Golden Gate Bridge to get to trail-head. Legs felt as heavy as the concrete buttresses holding up the damn bridge.

Once we got up top, I got the intensity back under control, and running over to Rodeo Beach, three became two. Within a few miles, I had to let #1 go because he was runnin’ like he stole something. I had a feeling he’d come back later.

There was a good number of guys chasing, including 2014 Rocky Raccoon 100-mile champ, Matt Laye, who’s now returning to solid form after a dealing with a frustrating hamstring injury for many months. Back in December, we’d both been injured and volunteering at a Inside Trail event and got to hang out so it was great to be experiencing this race with another runner who you know is especially grateful to be back in the mix.

Having done the MUC 50mi last year, and probably from the back-to-back long runs I’ve been doing in training, my perception of the 50k was… interesting, to say the least. It seemed to fly by. Not having raced in so long, I found myself completely in the flow of the race—trying to catch as well as trying not to be caught. Predator-Prey. Eat or be eaten. Indeed, I missed these primal feelings. Completely absorbed in the running, spiraling further down into the present moment, everything else melts away.

No race, however, is without its drama, and the front runners got a little jumbled as we came back around to Muir Beach on our way back to Tennessee Valley somewhere around mile 23. As it turns out Matt and another guy ended up shaving off 0.7mi from a short out-n-back to the aid-station, just about the time I’d caught 1st at the Muir Beach aid-station. So, after some clarification on which direction to run, thinking myself in 1st, I motored back the 0.35mi to the turn home, soon to realize at least two guys were up ahead. Great. That’s trail-racing—just like a box o’ chocolates.

I got up to the gate at Gulch to see Matt running back toward me. He realized he’d cut off the short out-n-back and proceeded to right the wrong, which resulted from some confusion at that dubious trail junction. Volunteers are doing the best job they can. Kudos to Matt Laye for being a stand-up guy. If he hadn’t been aware of the error, or chose not to correct it, I wouldn’t have been able to reel him in by the finish. That’s what we call sportsmanship.

Onward I go, all the way back to mile 26 at Tennessee Valley, where I have a fresh bottle of VitargoS2 waiting to refresh and power me up Marincello and to the finish line. I now know there’s one guy up ahead. He’s not local and isn’t aware he shaved off the 0.7mi out-n-back. And, after working my tail off to this point, ending up 2nd doesn’t doesn’t sound very good at all. 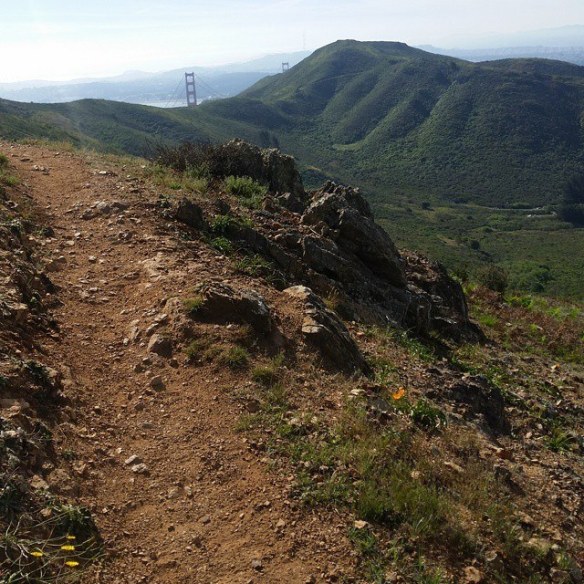 View from the trail of the last few miles of the Marin Ultra Challenge. No finish line beckons like the Golden Gate Bridge. Photo Credit: Jeremy Bardell

Close to the top of Alta, I was finally able to reel in 1st, after not really having it the whole race. It was pretty much pedal-to-the-metal to the finish, and running the steep stuff back down, under the GG Bridge, was a lot less miserable than it was a year’s worth of dominoes ago, finishing that beast of a 50-miler, which Terranova had the honor of winning this year. After returning from injury, it’s been a challenging road back to race-fitness. So naturally, it feels damn good to out there again mixin’ it up with the boys (and girls as is so often the case). 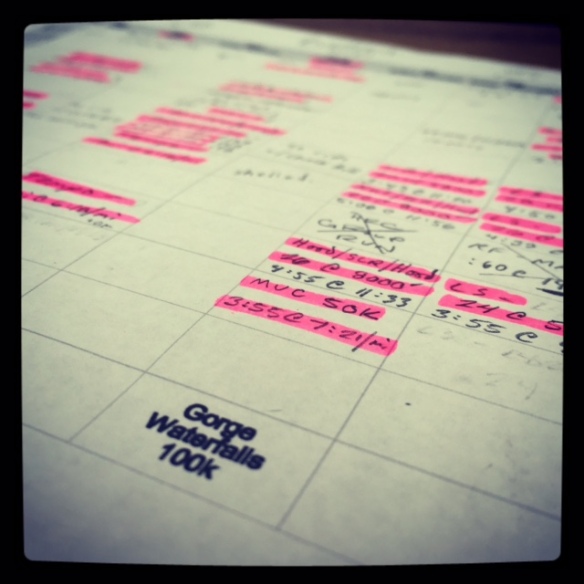 Yeah, so the hope is that MUC50k will serve as a solid tune-up for Gorge 100k, here at month’s end, permitting just a bit more sustainable abuse in those later miles. I’ll be going up against young bucks like Nike’s David Laney & Ryan Ghelfi, ultrarunning vets like Gary Robbins and Yassine Diboun, and dark horses like Chris Wehan and Nathan Yanko. I’ve stopped looking at the entry list on UltraSignup; it wasn’t doing my confidence any favors.

I’m expecting nothing less than a full-on suffer-fest in the second half of Gorge. I’ll show up prepared and run a smart, strong race. That’s all we can ever do. There’s only two Western States 100 spots and Laney already earned a spot earlier this year, so even if he won, for example, the WS slot would go to 2nd and 3rd place, unless one them declines, then slots roll down as far at 5th place. On paper my odds don’t look good. Fortunately we don’t run on paper. Like my high school wrestling coach used to say, “Anybody can beat anybody on any given day.” You keep up that honest effort all the way to the finish.

In the submarine world, where I worked for a few years, you have back-up systems for back-up systems. So I’ve done my best to navigate my 2015 event schedule to ensure something awesome happens this year. So if no Western States, then I’m already in at San Diego 100 at the start of June. And if I do San Diego, instead of Western States, then I have three additional weeks in between it and Cascade Crest 100 at the end of August, which will scratch my itch to race in the mountains since I’m not running my much beloved Tahoe Rim Trail 100 in July (though I hope to be there in some capacity other than running!). There might even be a little Javelina Jundred action thrown in come Halloween time, if things are goin’ well and I find myself hungry for something other than Snickers Bars and Milky Ways. I’ll get out to more ITR races as well. There’s so many good ones on their event calendar!

I recognize that the gold standard in ultra-running is still a Top-10 performance at Western States and I’d surely love the opportunity to run against the best there to see how I stack up. The 100mi is my best event because that’s the distance that speaks to my restless soul. Not to mention there’s a fair amount of downhill running from Squaw to Auburn, and I really like running the downs. With four Hawaii Ironmans in me, I know a few things about running well in the heat, and some of that proficiency has come from failing to run well in the heat. In the grand scheme of things, it’s just another race, but I’d be bummed if I didn’t get to do it while I was at my best. I’m no spring chicken. 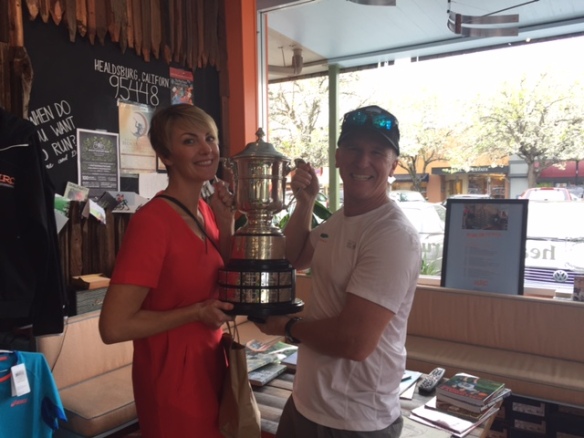 Thanks to my beautiful, loving, and highly supportive wife Amanda for her thankless job [even from afar] as “First Responder.” Thanks for fixing my stress fracture!!

Thank you to Hoka One One for the their continued support and producing the best shoes out there—#LetsGoHoka!

Thanks to Inside Trail Racing for your offering so many fantastic races in great places.  |   Thanks to Vitargo for the steady energy and making training/racing nutrition easy.  |   Nuya is perfectly natural hydration that combines electrolytes and carbohydrates to properly hydrate and fuel your body. I love it as a recovery drink!

Thank you Healdsburg Running Company for opening up in my ‘hood. Love the new store and the weekly group runs. It’s great to be building community with you!