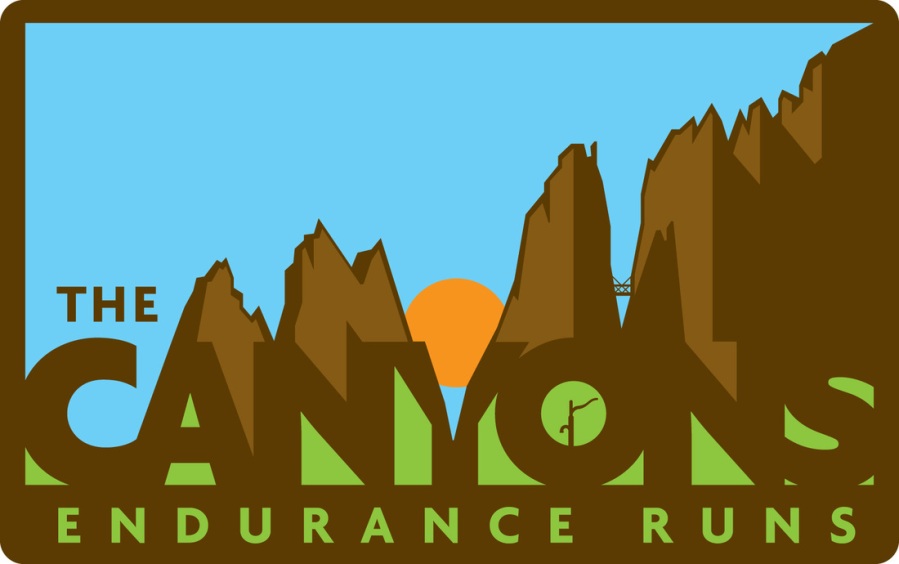 It’s 4:50am on Saturday, May 7th and I’m in Foresthill, CA, in my car, with the heater blasting listening to Kati Perry while studying weather.com. It’s forecasting rain to start around 9am. I stuff a super thin rain-jacket in a shorts pocket and jog to the start. At 5am, The Canyons 100k is underway.

From step one I knew it was going to be a good day running. My training told me so. My body told me so. And, since my sub-par North Face 50 back in December, my mind told me so as well. Confidence was high. Excitement was high. And I was bouncing along overjoyed to again be in the mix of another tough mountain ultra. 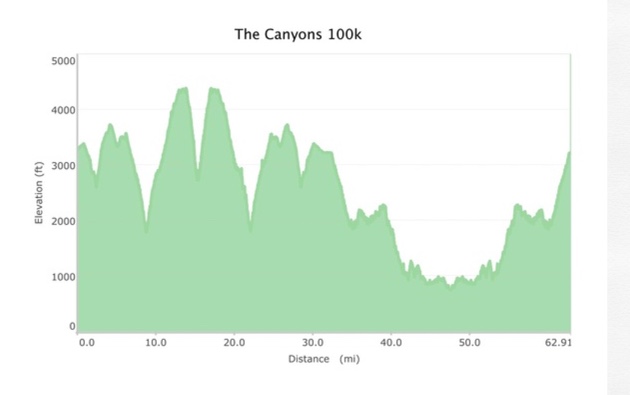 Canyons represented the final test to see if my ol’ knee was truly back to 100%. Would it hold up over 10hrs of racing with 15,000′ of cumulative descent? All of my emphasis in training for Canyons was on the flats, ups, and goin’ long, because it was hotdogging it on the downs racing at the end of 2015 that got me into trouble with the knee. Therefore, healed up good, Canyons would serve as a key downhill workout for Western States 100 in late June. And man, am I glad I did this race. I underestimated what that course would do to my quads! Dropping out of both Sean O’Brien 100k and Gorge Waterfalls 100k earlier in the season were tough decisions but I needed the time to both heal up and reinvent my ultra-run training. I still want my cake and want to eat it to, that is, I desired to have at least one ultra in my legs going into States with the objective of toeing the line 100% fit and healthy. In Feb, I felt that was a lot to ask of myself, thus demanding I restructure how I train.

For Canyons I took notes on Rob Krar’s post-race interview with USL.TV’s Jeff Miller after his win here in 2015, and worked mindfully in the first half of the race to try and set myself up for a quick run from Foresthill down to the River, on iconic trails many of which I’ve never had the privilege of running before.

I was coming in at a training peak but without the extra punch having a spring race or two would give me. That punch would come as a function of simply executing an effective 100k here though. My three primary objectives for Canyons 100k:  1.) the knee needed to hold up 2.) I needed to get some good downhill stress goin’ and 3.) I needed to not push too crazy hard up from the River at mile 48 to the finish so that I could limit recovery time and get back to quality 100-mile training as soon as practical since Western States would only be seven little weeks away.

The early miles were enjoyable and my body started waking up with the sunrise. There were four of us on the front including Luke Garten, Peter Fain, and the guy with the Irish accent, which I quickly deduced was Paddy O’Leary. We dropped lamps at Michigan Bluff, cruised up through El Dorado Creek, The Pump, then farther northeast until we heard  URP’s Eric Schranz’ alphorn at Devil’s Thumb. Switchbacks all the way down to Swinging Bridge following Luke and Paddy, where we got our obligatory bracelets and then it was up, up, back up to Devil’s Thumb.

The rain started coming down and temps were hovering around 50deg so I put on my wispy rain jacket and was psyched I’d decided to bring it along. I didn’t want to be forced to run harder just to keep my body warm at this early point in the race. Being comfortable keeps me happy, and if I’m happy, I’m moving well.

On the way back down toward El Dorado Creek we were rocking it. With the double out-n-back course layout, it’s fun to see everyone in the race, especially the four guys I’d coached to this event. This section was probably the most fun I had all day since it was still early and the running was effortless. Always holding a little back for that run down to the River from Foresthill though. The anticipation was electric!

And soon enough, it was just Paddy and I making the left on Bath Rd with him hitting the aid station about 10sec before me. As I arrived, I spied my Sonoma County buddy, Christopher Thomas, working the Foresthill aid-station, with my drop-bag. I said, “dump it” and handed him my HRM strap, picked up my two bottles of VitargoS2 and motored on down Cal St at 6min pace. Those tempo runs I did on the road made it feel pretty easy.

So… I’d asked the RD, Chaz Sheya, that morning just how far down Cal St the turn was, in an effort to prevent getting off course since I’d never run this section (and I have a healthy fear of getting off course). Yeah so, during the race, as I’m heading down Cal St. I see two pink ribbons on the left and none any farther down. So I go left, and run down the road a bit lookin’ for pink ribbon. I ask an old-timer on his porch if there’s a trail down here and he replies that it’s a dead end. Awesome. I turn around and run back toward Cal St, see Paddy and we exchange shoulder shrugs and make the obvious decision to run farther down Cal St to the proper left turn, where we quickly regain and follow the pink-ribbon-road down to Cal 1. 6:16 pace… Let’s do this!

Paddy’s been running like a champ all day and all I know about him at this point is that he’s run under 7hr at NF50 so he’s got a big engine and it’s bigger than mine. Later, after some online stalking I would discover Paddy won Inside Trail Racing’s Chabot 30k back in Feb, got 4th at Cool 50k with a 3:27, and threw in a 2:37 at Boston for good measure. Really Paddy? At this point in Canyons though, I’m pretty sure this is his first 100k, and shit can happen.

Without burying myself to try and go head-to-head on the way back up—to preserve something for States—I know my only plays are either open up a gap on the way down, which he’ll work to close by the finish line, or just simply outlast him. I’d have fun with dicing it up until the choice to shut it down became obvious. Until then, continuing to work hard all the way to the River would cap off a great day of strong downhill running. And my quads were really beginning to feel it. Daaaaaamn…

We run into Cal 1 together but since I’d picked up two bottles of Vitargo in Foresthill, I didn’t need anything. I told Paddy I’d see him back on the trail and cruised into the lead starting to think about trying to open up that gap. By Cal 2 I’d opened a 2min lead and then set my mind to the task of running the longest stretch without aid of about 8mi down to the River, to the turnaround at Ruck-a-Chucky.

Less than a quarter mile from the turnaround, as I was dreaming of having opened a 5min lead on 2nd, Paddy passes me on the left and floats away up toward the aid-station ahead. I stay with him. I dropped my bottles and the volunteers and I go on a little easter egg hunt for my drop-bag (an occupational hazard of sorts of running on the front—aid stations aren’t always ready for you). We find it and I grab my fresh bottles and hightail it outta there. About a mile later, Paddy catches me and moves ahead. “Well, kid’s a hellava runner,” I think to myself. “You’ve done a good job here today Shebest. Execution’s been solid, knee’s held up, and your speed’s there. Keep pluggin’ and get this 100k in the bank for States. You’re right where you wanna be.”

As I ran up I was looking at my watch to see my growing split to 3rd place. Expecting to see Luke or Peter, I was surprised (not-that-surprised) to see fellow Hoka One One teammate, Magda Boulet. At that point I only had 40min on her, so I knew I’d better keep a move on.

In damage control mode now, it was nice to have good climbing legs, although I was ready to be done, pretty tired from all the hard work I’d put in running with the kid all day. That made the race for me though. I’m still amazed how being in the flow of racing makes the hours just float by. Magical. Eventually, I ran into Luke and two members of Paddy’s crew, shot the breeze with them for a minute and got back to the task of getting my tired ass back up to Cal 2, by which point, by the way, Paddy had put 15min into me from the River. Whatever.  😉

Between Cal 2 and Cal 1 I ran into a different nemesis, in the form of Eric Skaden and we reminisced about all the times he handed my ass to me in various races like TRT100 and Miwok 100k. It was good to see him out there and get to chat a bit about Western States training and execution.

Thank God it’s not 5 or 6mi from Cal2 back up to Cal St. I was very much ready to be done, though still in very high spirits. Today was just a sweet, sweet day of running and I was so grateful to be healthy, moving, and getting one last race in before my birthday on Monday. Climbing back up Cal St to the finish at Foresthill Elementary School was pretty cool. I looked over my shoulder a few times to see if Magda was going to run me down, which I thought was going to happen at any moment in the final 5 kilometers. I said in jest at the finish line, “Never trust an Olympian!).

Man, it felt good to arrive at the finish. Canyons is one badass race! And if it’s good enough for Magda, going in to to defend her States title, I’m feeling pretty damn good about having done it as well. I’m giving myself about 10 days of no running then really looking forward to a robust 3-week training block for the big dance. School’s out for summer on the 27th, so I’m really looking forward to the singular focus being off from work will afford me to concentrate on simply executing perfectly on June 25th. #noexcuses

This will be my very first Western States 100. I’ll have just turned 42 years young. I don’t, however, have the luxury of time to eventually “figure it out” like I did with my four Tahoe Rim Trail 100s. I’m lookin’ at it this way—those TRTs were like the four years it takes to get a Bachelor’s degree. Similarly, Pine to Palm 100 and San Diego 100 earned me a Masters. I started my PhD with Run Rabbit Run last September and hope to defend my dissertation in Mountain Ultrarunning, here in my 8th 100-miler at the Western States 100. Believe! Believe! Believe!

Faster than Twitter, thanks to my beautiful, loving, and highly supportive wife Amanda for her thankless job [even from afar] as “First Responder.”  |  Thank you to Julbo Eyewear for the beautiful, functional, and comfortable sunglasses. It’s GREAT to be working with you!  |  Thank you to Hoka One One for your continued support and producing the best shoes out there—#timetofly!  |  Thanks to Inside Trail Racing for offering so many fantastic races in great places.  |  Thanks to Vitargo for the steady energy and SIMPLIFYING my nutrition.  |  Thank you Healdsburg Running Company for all the wonderful support. HRC rocks! | Victory Sportdesign produces the best drop-bags in the biz! | Thanks to Dave Townsend at Santa Rosa Physical Therapy for helping me keep the dream alive!